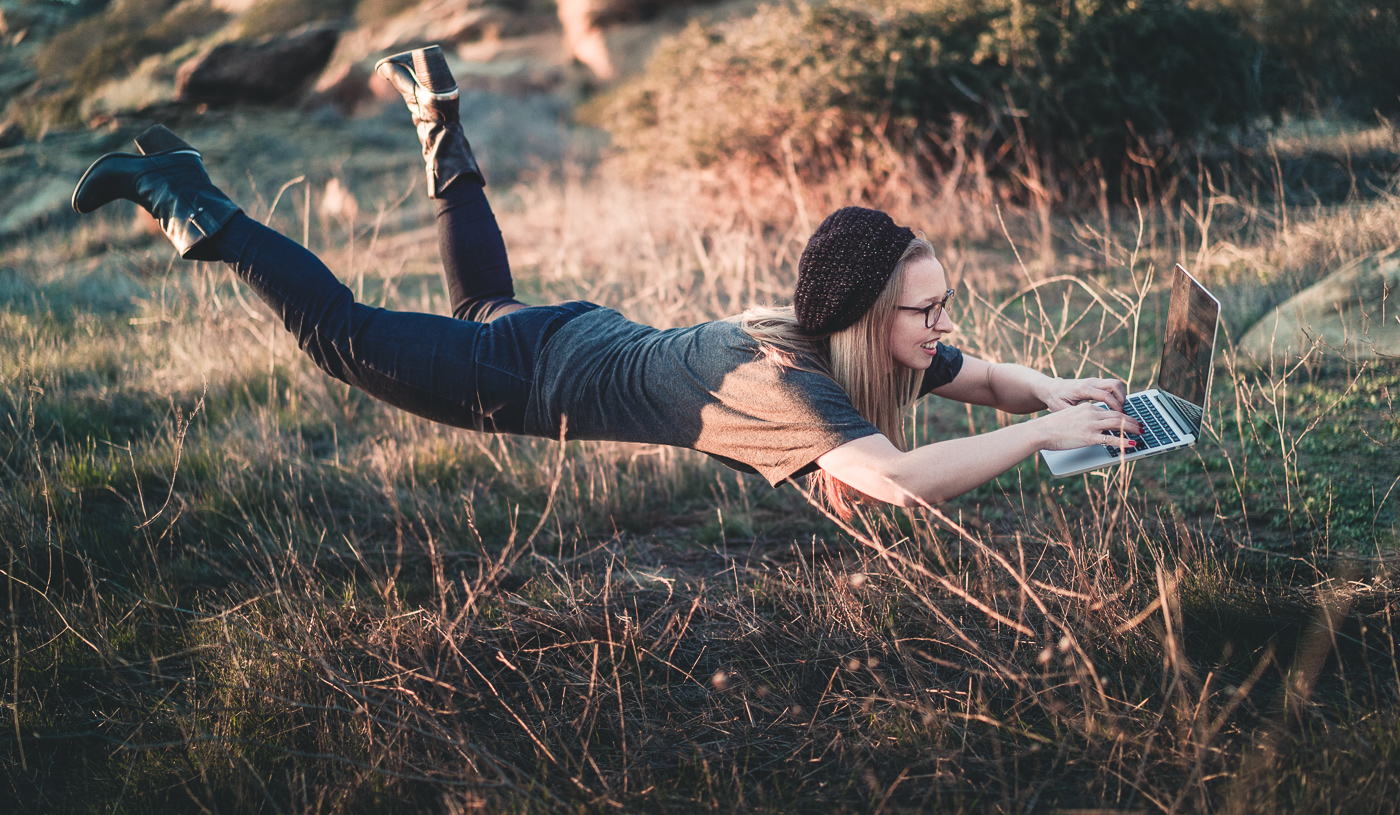 Check out all of our other how-to guides here.

In this tutorial we will learn how to make some compelling levitation shots, with two different methods. Plain simple. That’s it 🙂

I think that creating a surreal portrait exemplifies the creative process. The entire experience, from planning to set up to shooting to processing, is a slow and methodical creative endeavor. When you have the intention of creating something surreal, all the constraints and bounds on your creativity are loosened. With such loose constraints, you are limited only by your imagination and your results will directly reflect the your creative efforts. Think of levitation as one of many elements of your photo. There are still a lot of other things to think about other than just the levitation part: your subject’s pose, the setting, the light, makeup, clothing, props, and all the other technical elements of the shot. Think about what unique ideas you can bring to your levitation photography project.

This post originally appeared over at The Photon Collective. We are republishing here, with permission, because there is some truly great content in it.

There are more ways than one to levitate. The first and most rudimentary method is probably the most obvious:

I tend to dislike the jumping method for a number of reasons: It’s difficult to make look natural, it requires care to not fall and get hurt, and it’s downright exhausting to perform. My very first attempt at levitation photography was a self portrait and I used the jumping method to make it. 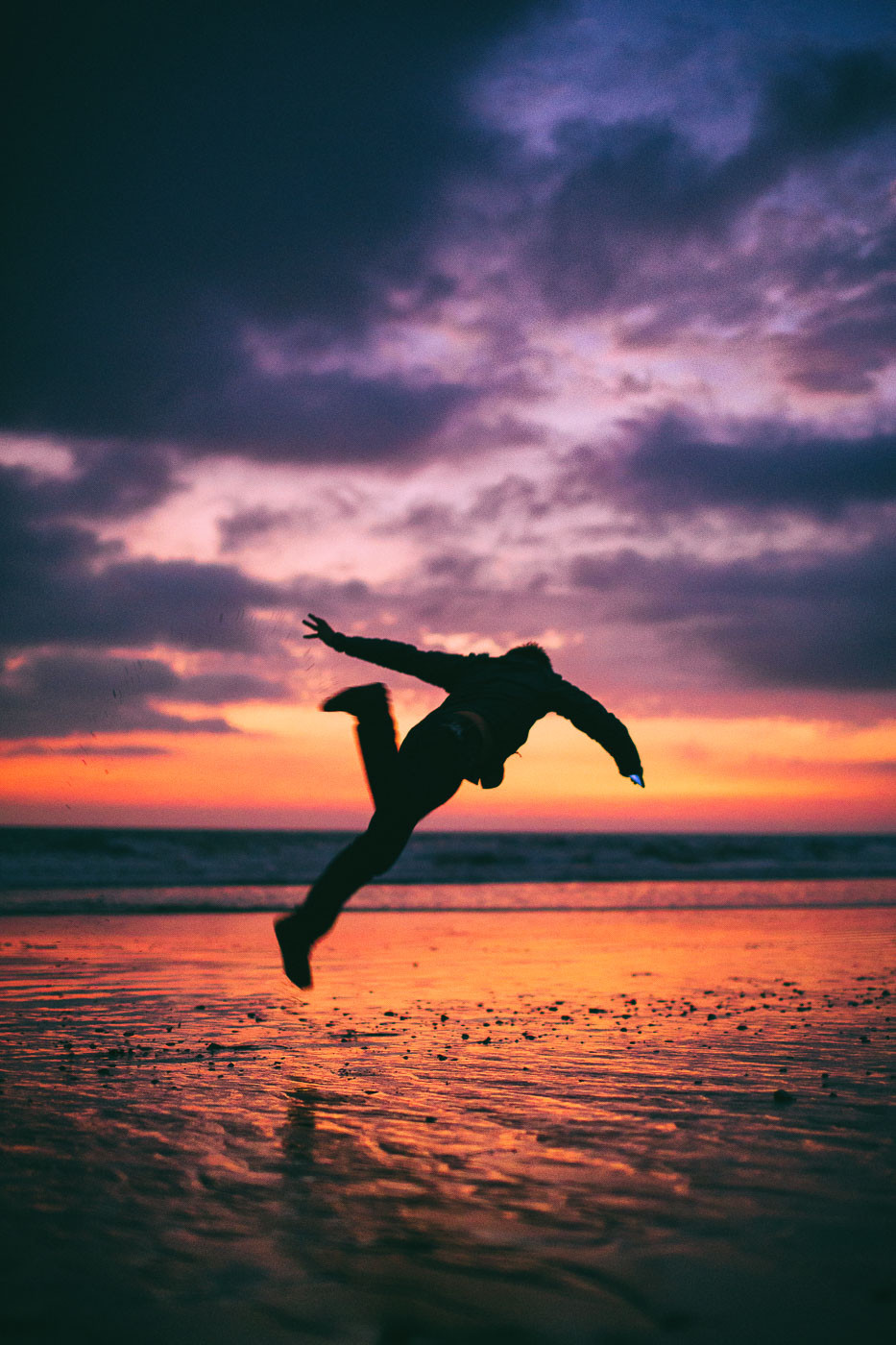 Using only my camera on a tripod and an infrared remote to trigger the shots, I would jump and twist my body at numerous angles to try and capture a good levitation photography pose. The camera was set to continuous shooting mode in hopes that I could capture as many potential frames as possible. Every once and a while I would get lucky and actually grab a frame right at the apex of my jump. I’m pretty sure numerous people walking by me on the beach thought I was absolutely off-my-rocker-crazy for jumping around like a complete fool, but I was actually pretty happy with the results. 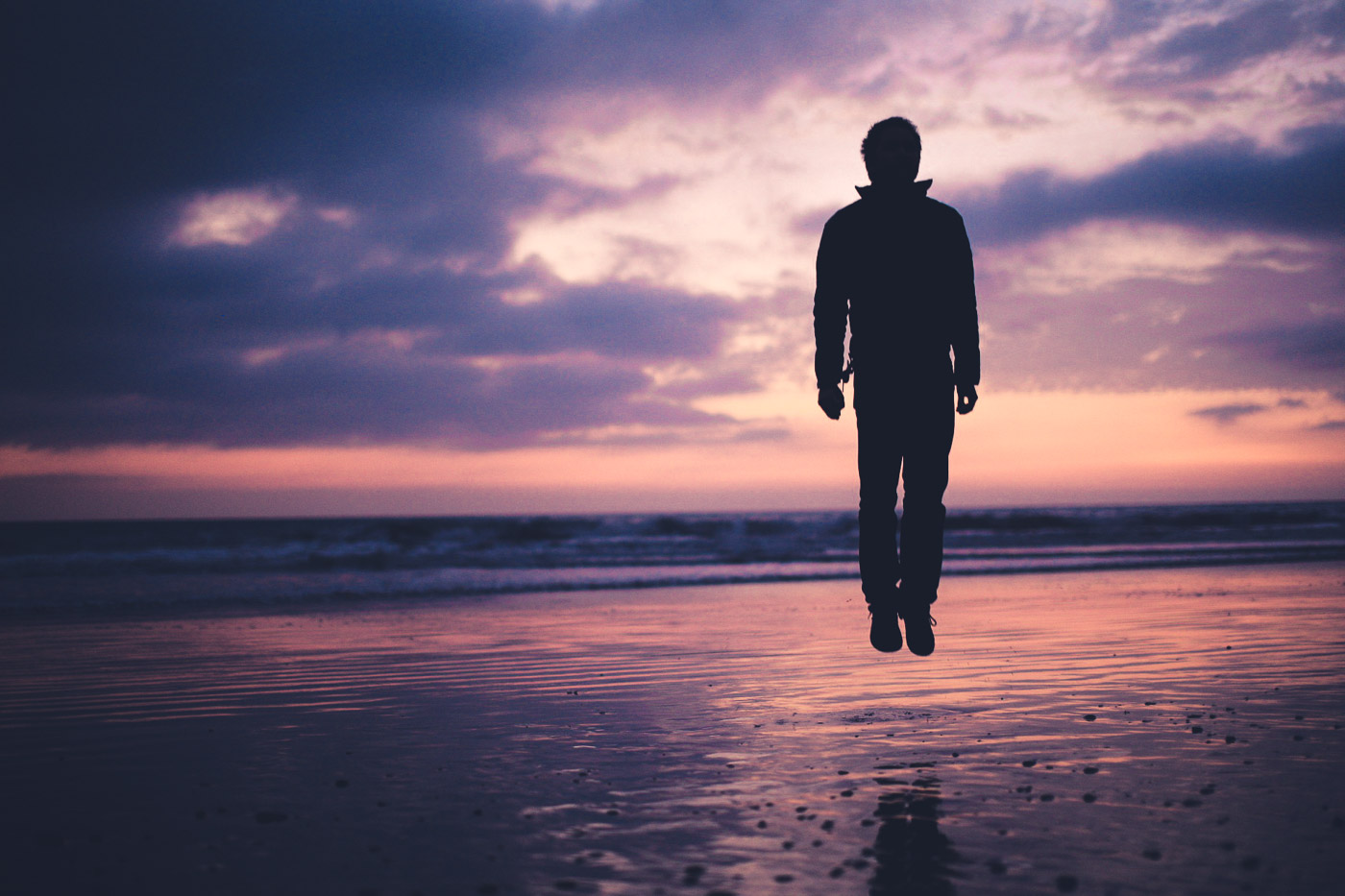 I would like to say that this technique can work fairly well, but it’s very difficult to get right and nearly impossible to safely make a photograph with your head lower than your feet without face-planting. I have seen it used to great effect and it can be a fun, impromptu method to levitate your subject when you’ve forgotten your step stool. The best part of this method is that it’s not necessary to perform any Photoshop tricks to get the final result. But you’ll look like a complete fool doing it.

For the best results, you’ll want to used the method below. It will require more pre-preparation and post-processing than just jumping, but it opens up the possibilities for composition tremendously. The support method is my preferred way to shoot a levitation portrait. I used a simple $5 IKEA stool for almost all of my supported levitation photos. Using a support of some kind is preferable to jumping because it’s possible to place your subject in more interesting poses. Putting your subject’s head lower than their feet can result in a very surreal look and in my opinion has more impact than a photo where their body is more upright. While easier on the model, the support method makes for a slightly more difficult shooting process. It requires compositing multiple images in post processing so it’s necessary to carefully execute the shoot for the best results. 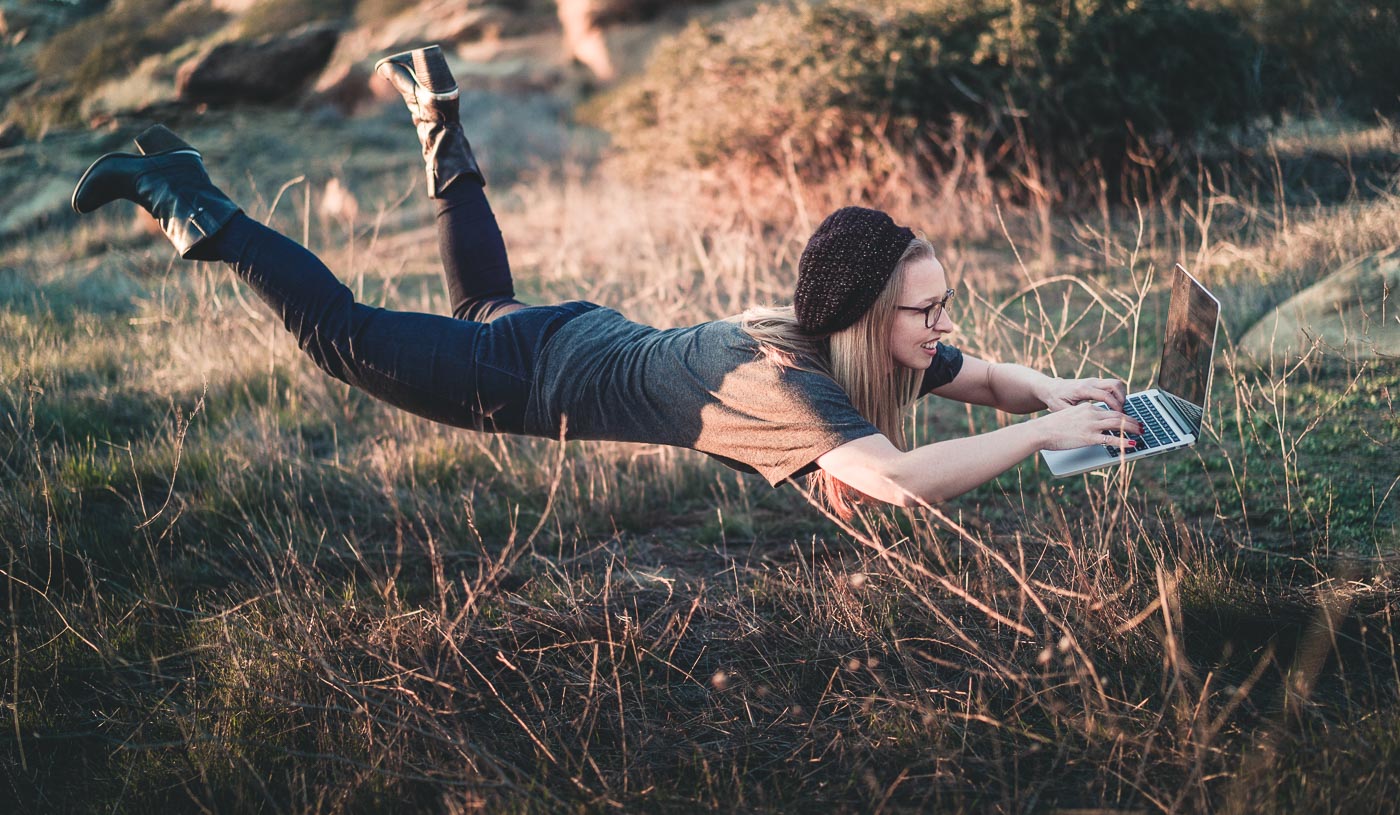 We will want to take two photos with the camera in the exact same position with identical framing. A tripod is absolutely necessary when shooting this kind of levitation portrait.

The first photo is the portrait and the second photo is an identically framed shot of just the scene without the subject. It’s very helpful to use an identical focal point and identical exposure settings between the two photos. Shooting in manual mode with manual exposure will ensure that neither the exposure nor focus point will drift when shooting (just don’t bump your focus). Ensuring that these photos are identically framed and exposed will make the final compositing in Photoshop the easiest. 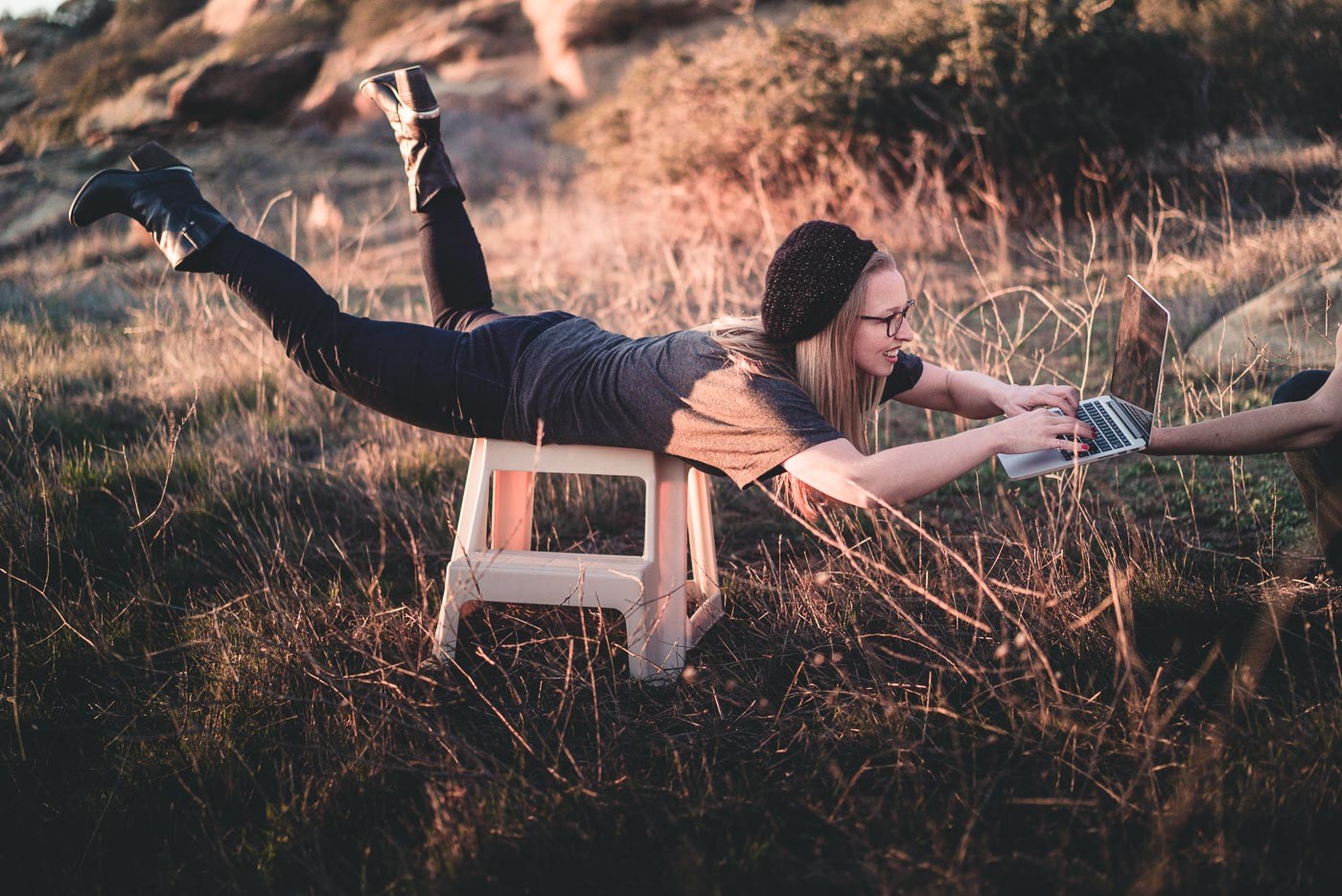 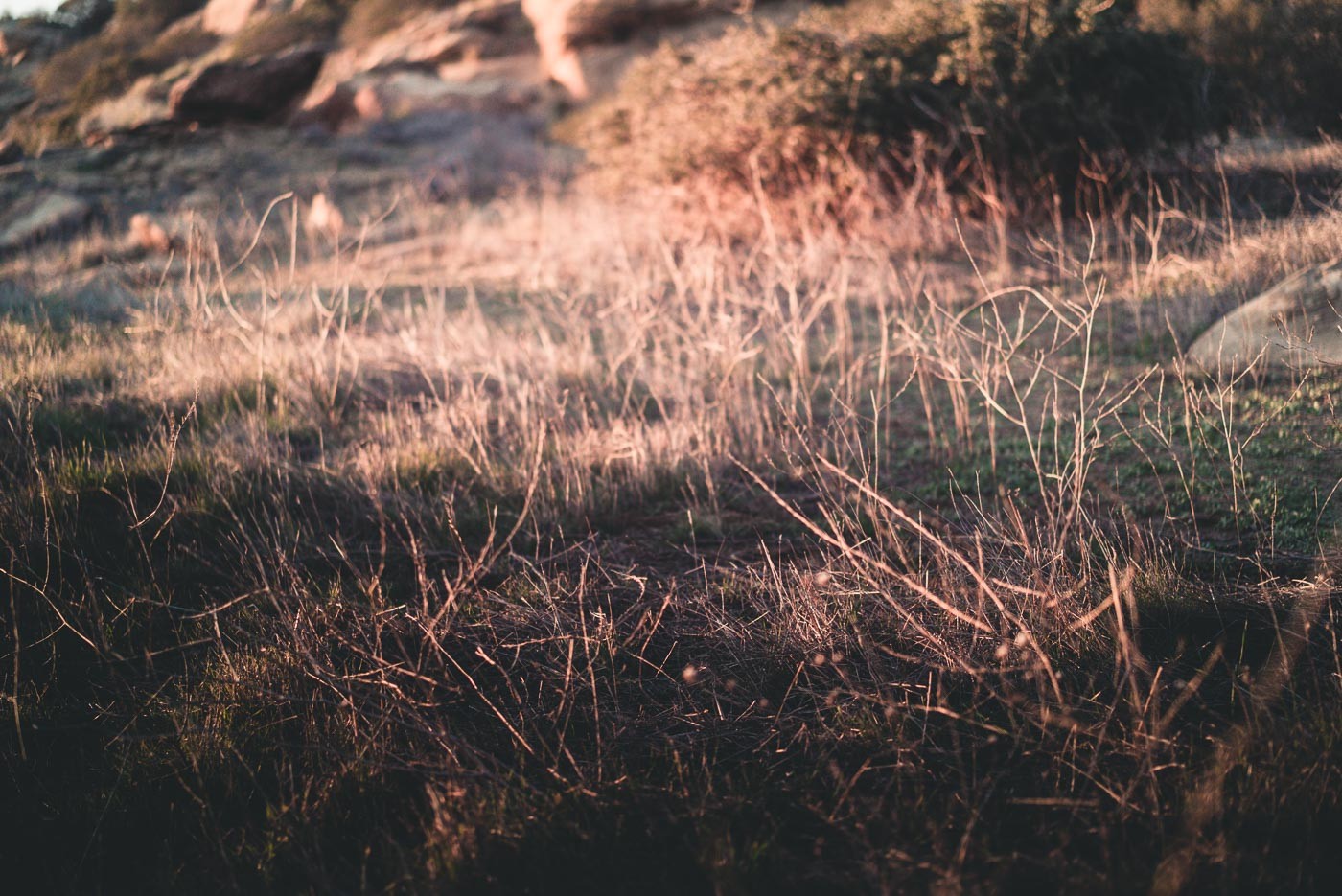 I prefer to shoot the portrait first for a couple reasons: it allows you to get your framing just right to complement your subject’s pose, and it lets you see nearly the final result. Once you’re happy with the framing, pose, and exposure and you’ve ensured that you got the best shot of your subject, have your subject exit the scene and then snap a quick shot of the bare setting.

I prefer to use this technique during the “magic hour” right before or even after sunset when shadows are low and diffuse. It makes it easier to mask out the stool when the shadow is a diffuse blob rather than a dark figure. Shooting on days with a grey and gloomy overcast sky is also great for these types of portraits. The shadow will usually be very diffuse and the light tends to be soft and flattering for your subject.

It’s important to find a pose that doesn’t look too much like your subject is supported on a stool. If they’re just sitting on their bum or standing on the stool, it will likely be obvious that there is something supporting them and that it was just ‘shopped out. The best way for your subject to support themselves is on their back, chest or stomach. Since humans rarely support themselves with solely their back, chest or stomach, it makes it less apparent how they are supported in the final photo. 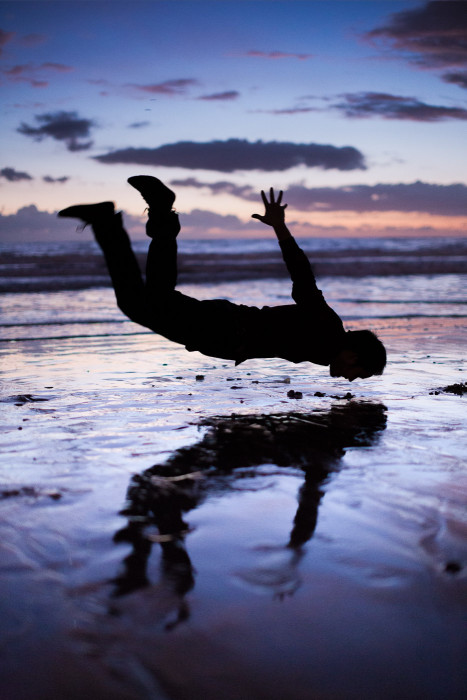 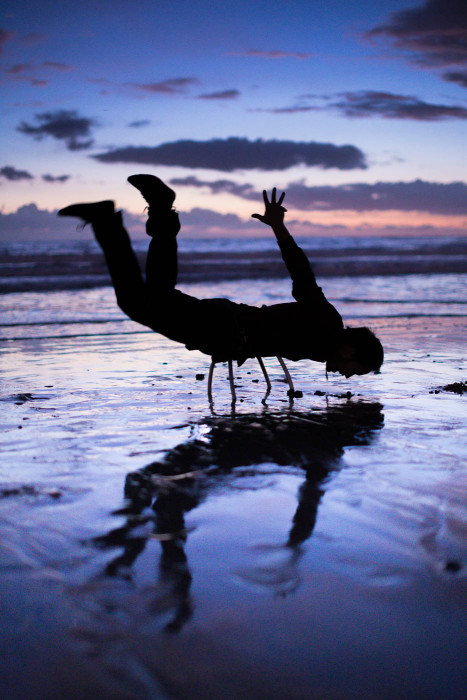 Similarly, placing your subjects head low to the ground is a great method to add tension to the photograph. We don’t usually expect people’s heads to be lower than their feet, so this helps contribute to the illusion of the photograph as a whole.

Post processing is done very simply in Adobe Photoshop with layer masks. It’s easiest to explain this in a video, so check out the post processing video below:

Remember that you’re not limited to just levitating a person. For the title image of this tutorial, I wanted to create a dreamlike setting for Diana. 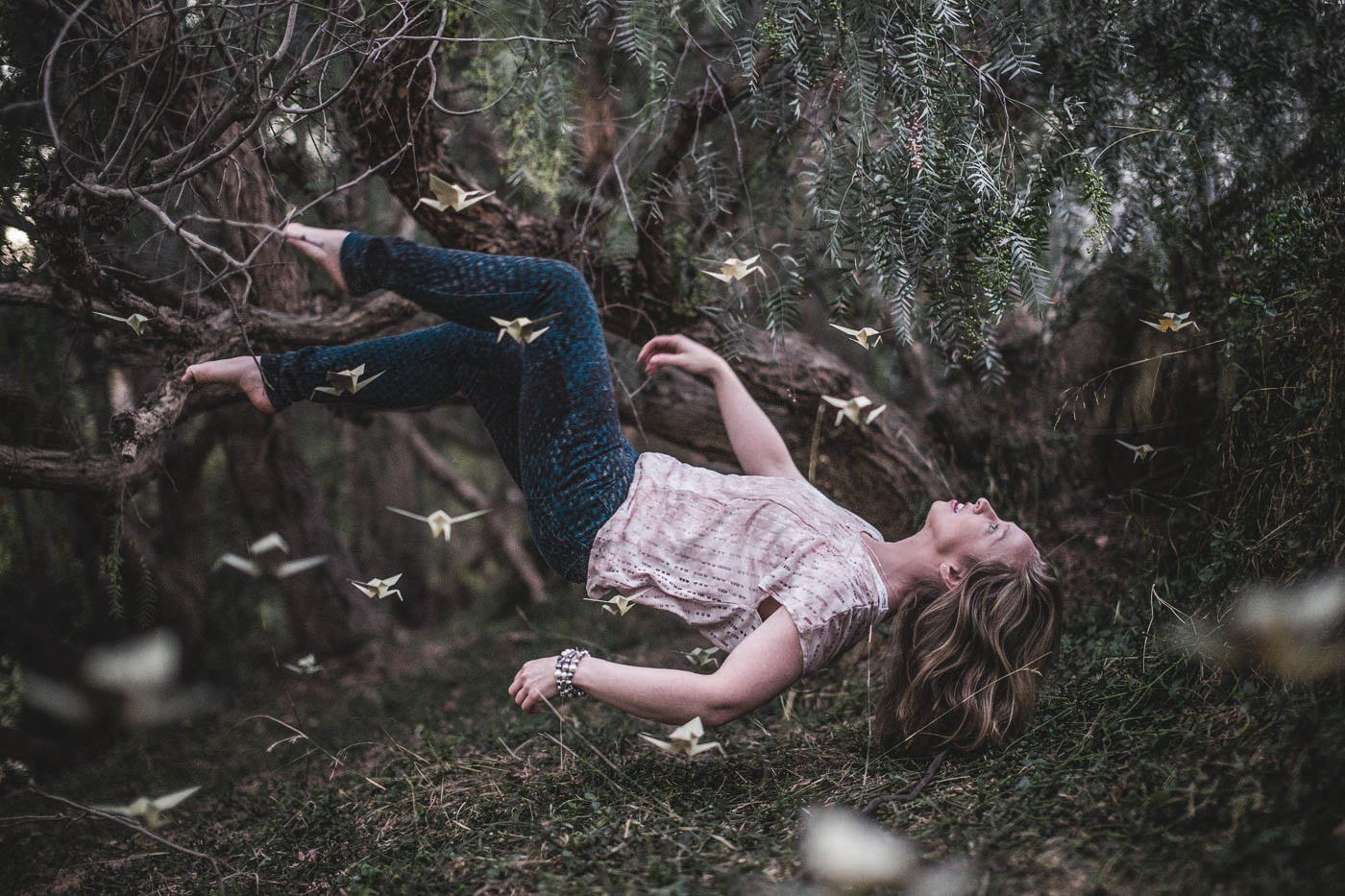 We made a single paper crane suspended from a piece of string and photographed it numerous times in different positions around the scene. Then it was just a matter of compositing all of the photos into a single image to give the effect that Diana was floating among a flock of origami cranes. 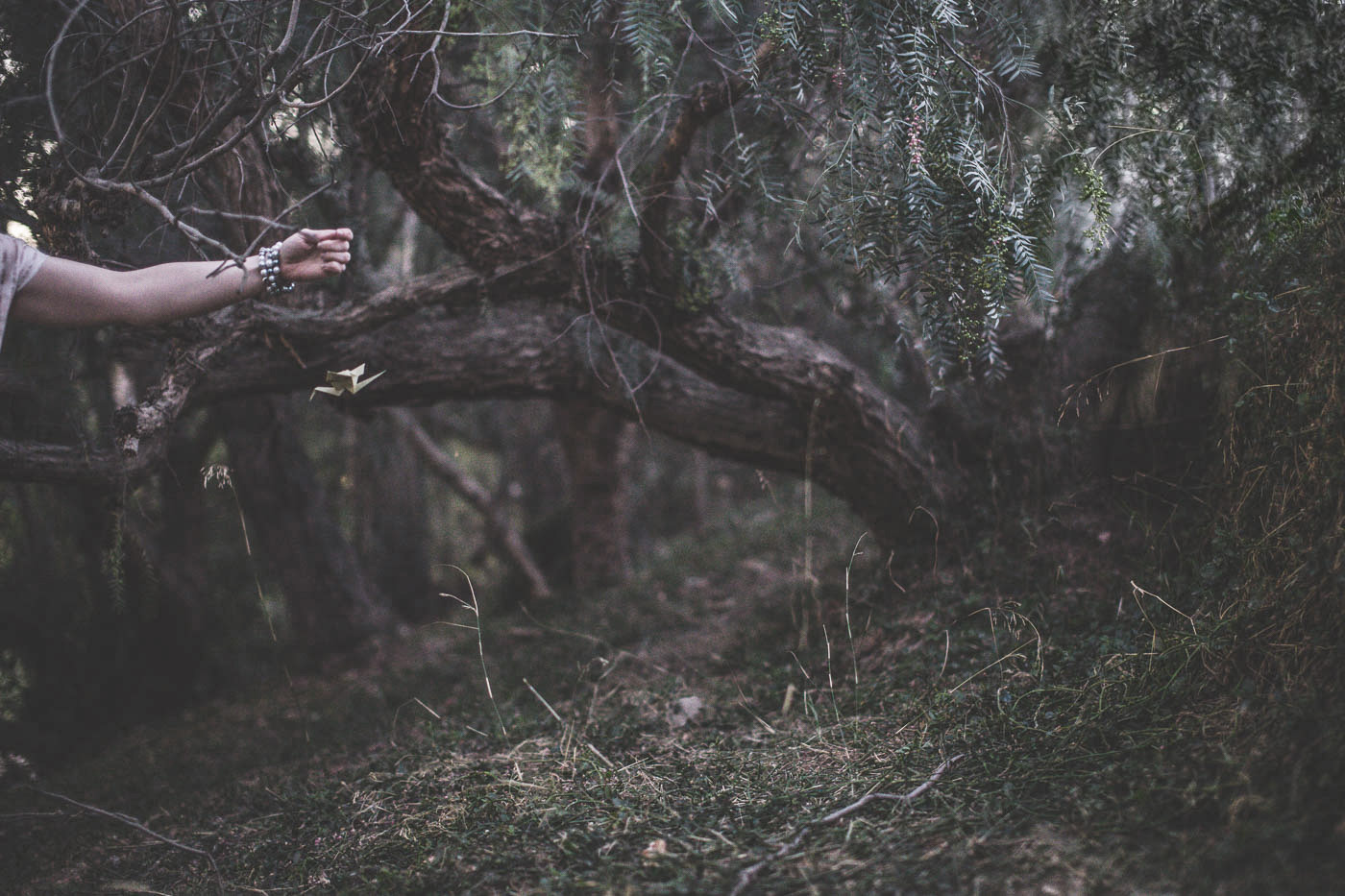 Levitation photography is a ton of fun. It requires a little bit of practice and patience, but the results are almost always fun and interesting. Tell us what your results are!

Ian Norman, co-founder and creator of The Photon Collective, is a full time traveler, photographer and entrepreneur. In February 2013, he called it quits on his 9-to-5 to pursue a lifestyle of photography. Follow Ian on Twitter and Instagram.

If you liked the article, please share it to the world!